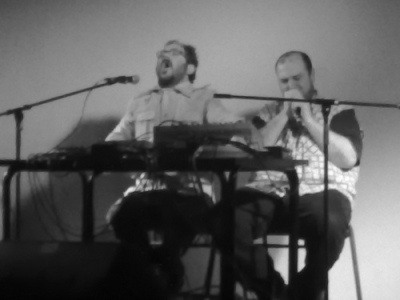 Hosted by Eran Sachs and Alex DROOL, PRIMATE ARENA is a nomadic freeform happening for experimental & out muzak events (mostly in Tel Aviv), dedicated to Psych, Noise, Speech/Sonic/Concrete Poetry, Avant Rock, Improv, post millennial obscurities, pre millennial obscurities, the history of 20th century experimental music & other adventurous ventures. At times per formative, at times ephemeral and elusive, over the past several years they have created a platform – central to Tel Aviv’s now vibrant, thriving scene – that has nurtured a community of adventurous local musicians including Maya Dunietz and Yoni Silver and hosted visiting internationals such as Blood Stereo, Dave Philips, Jérôme Noetinger, Fritz Welch, Arnaud Rivière, Ignatz Schick, Daniel Padden, Bob Ostertag and many others. In 2010 they have teamed with Brighton based festival Colour Out of Space in a UK tour and a festival that took place inthree cities in Israel.

Alex (Drool) Yonovich (b.1976) is a self-taught drummer, “non-musician” and improviser living in Rehovot, Israel. he has collaborated live with a diverse selection of international musicians such as Steve Noble, Adam Bohman, Jérôme Noetinger, Steve Mackay, Dora Doll, Sharon Gal, Arnaud Rivière, Valerio Tricoli, Daniel Padden, Mattin, Ignaz Schick, Eric Boros & many more. utilizing a simple setup of modified acoustic instruments, tape loops and sometimes analogue synths he creates a variety of dynamic sounds that shift from sparse crystalline movements to dense fog shrouded avalanches, which have as much in common with the likes of John Cage and Bob Cobbing as it does with Wolf Eyes and The New Blockaders. regarded as one of the busiest experimental sound artist in Israel he has performed in many local events and festivals and collaborated with countless local artists which helped establish him as one of the most pivotal figures in the Israeli avantgarde circuit. Together with Sachs and conductor Ilan Volkov he organizes a series of ground barking performances of international visiting artists such as Daniel Higgs, King Kahn and BBQ, Susan Alcorn and others. His duo Wreck & Drool has released several recordings on labels such as Red Bootkeh, that Canadian label and Tophet Prophet.