Since 2011 I have had the immeasurable fortune of being a member of the International Hyperion Ensemble, which revolves around the works of the Romanian Spectralist composers IANCU DUMITRESCU and ANA-MARIA AVRAM. The ensemble features prominent musicians such as reeds-man Tim Hodgkinson [Henry Cow], guitarist Stephen O’Malley [SunnO))), Khanate] and percussionist Steve Noble alongside a roster of incredibly adept musicians from Romania, France and Israel.

In November 2011 I was lucky enough to conduct Hyperion in performances of my composition Pulsa Denura, in Paris, London and Berlin.

Hyperion was founded in 1976 by the composer Iancu Dumitrescu. As a starting point, Hyperion explored possible connections between the most archaic Romanian music – Byzantine music, folk music collected by Bartok, etc. – and today’s avant-garde music. It is a tradition of performance, of interpreting each new score as a provocation of the spirit, and a quest for new domains of sound. Aesthetically, at the heart of this work is the notion of spectrality as it developed in the work of Dumitrescu, Avram and other Romanian composers – that is: a specifically transformational spectrality, as opposed to the structural spectrality of the French Itinéraire group. Hyperion has performed all over Europe, Israel and in United States, and recorded numerous LPs and 28 compact discs. (from Mode Records- New York) 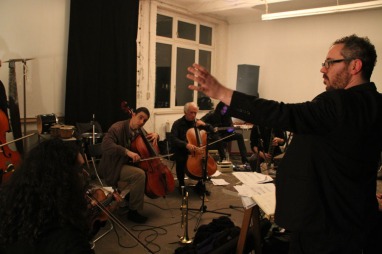 Iancu Dumitrescu is considered one of the leaders of the spectral music trend at a worldwide level. In 1976 he founded the HYPERION Ensemble, proposing a new aesthetic in today’s music, hyper-spectral, based on the radiant power of sound, within its microcosmic complexity – which is questioned, analyzed, re-composed ​​from a spectral perspective.

He centers his work on the phenomenological principle, which Sergiu Celibidache made him to discover, and which Dumitrescu applies to the composition itself, and on the idea of acousmatics. Acousmatics represents for Dumitrescu not only « the art of disguising a sonic source » in a concrete approach, but the very metaphor of the sound, infinite, cryptical alchemy applied to the sound material.

Ana-Maria Avram is a composer, pianist, conductor, born in 1961 in Bucharest, Romania. She studied composition at the National University of Music- Bucharest and musical aesthetics at Sorbonne, Paris. She has been a member of the Hyperion Ensemble since 1988. Her music is affiliated with the spectral music trend and incorporates the outward semblences of abstraction of archetypal sound, achieving its full development in the synthesis of electroacoustic and instrumental sources. She composed since now around 130 works, music for soloists, chamber music, music for orchestra, electronic music and computer assisted music including commissions from the Kronos Quartet (San Francisco) Ç 20 Jahrhundert È from Vienna, soloists from l’Orchestre National de France, orchestras as Bucharest Philharmonic Orchestra, Romanian National Orchestra, Romanian Radio Chamber Orchestra and L’Orchestre de Chambre de Roumanie amongst many others.